“The Trial of Doctor Kate” is a Page-Turner 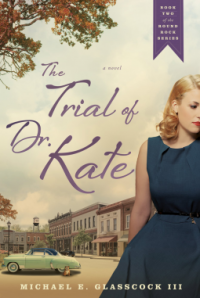 Shenandoah Coleman escaped both her family heritage as drunkards and no-goods and her home town o f Round Rock, Tennessee. After serving in the Woman Airforce Service Pilots (the WASPS) during the war, she settled in Memphis pursuing a career as a reporter. Until she sees her old friend, Doctor Kate, is on trial for murder. Can it be possible? Shenandoah wrangles an assignment that will send her home to Round Rock to cover the trial and give her an opportunity to do some research at the same time. While she’s not sure what to expect from her homecoming, it becomes immediately apparent that someone doesn’t want her there. Is it because of what she may uncover about Doctor Kate or about the people who are accusing her?
Michael Glasscock gives the reader a much better read than the first book in this series, “Little Joe.” The characters in “Doctor Kate” are intriguing, lively and the resolution is not quite what you would expect. The small town of Round Rock comes alive with a cast of small town characters (including a dog) that will keep your attention and keep you guessing.
I’d give “The Trial of Doctor Kate” a solid four stars. An added bonus is that this is a book suitable for middle grades and up.
This book was provided to me by the publisher for this review. The opinions, however, are entirely my own.