London, Again…starting with the Tower.

The Tower of London at dusk

Now, when I left off on my London tales, we were headed for the Tower for the Ceremony of the Keys. Now, this is a great example of why I love the Rick Steve’s Guide books. I’d never heard of the Ceremony of the Keys and never would have except that I found it in the guidebook and sent away for free tickets. (After I called five different post office locations to find someone who could tell me that they had international return coupons…but that’s another story!) The tradition of locking the Tower is over 700 years old and takes place nightly at 10:00 p.m. The Warders did a terrific job of telling us the history of the ceremony and a bit about the Tower itself. Now, for me, the word tower conjurs up the idea of one building, but the Tower of London is a massive fortress complex built over time and many reigns around the original “White Tower” started by William the Conquerer. Photos weren’t allowed during the actual Ceremony of the Keys but it was an outstanding experience. Simply to be in the Tower with the lights fading from the sky and the wind whispering up from the Thames was beautiful. The famous Traitor’s Gate gave me a bit of a shiver and our guide pointed out the window where the two princes who were murdered in the Tower were last seen. Later, my mom asked me if I saw the people they had staged behind the windows but I never saw anyone and I forgot to ask the Warder on my next visit….I guess we’ll never know just what she saw! 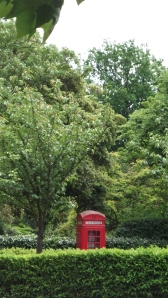 Just a bit of a fun picture.

On our way to or from the V & A, I spotted this call box just sitting by itself and it tickled me so much I took this photo. As a somewhat rabid Doctor Who fan, I thought maybe I could color it blue in Photoshop and make it look a bit more like a TARDIS!

This is another favorite shot from our wanderings to and from the Victoria and Albert Museum. We were passing through the buildings that make up the Royal Academy of Music and I spotted this lovely Lab sitting so patiently for it’s owner…or was it waiting for its’ voice lesson? 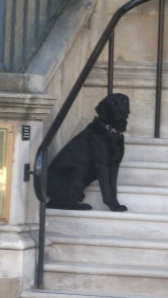 I was really missing my black Lab, Nick, and would have gone over to pet this one but I was afraid I might frighten it (or that someone would think I was trying to steal it!) 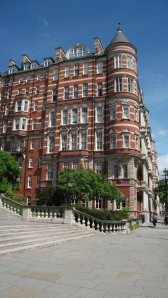 This is another one of those beautiful buildings that I loved in London. Note the blue sky behind it….we had wonderful weather the whole time we were there, at least by Oregon vacation standards. It hardly ever rained and the sky was blue many times and even the grey and overcast days were quite warm (again, by Oregon standards.) I take the whole credit for this myself as I lugged my big coat on the trip with me assuming that we would have cold, rainy Spring weather. Instead, I only wore my big coat twice (and once was in the hotel room!)
Ah, once again I’m starting to fade and so I’m going to stop here before the typos get worse and get some sleep. With luck, tomorrow will get us all the way to Bath where I turned to my sister and said, “Perhaps we should rephrase the saying and make it ‘what happens in London stays in London.'” Many fun stories to tell about Bath…stay tuned!

2 responses to “London, Again…starting with the Tower.”